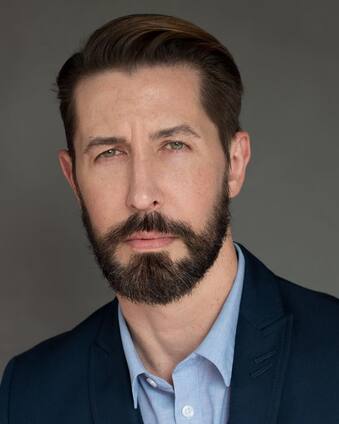 ​​​"Green is indescribably captivating in this role, showcasing both the best and worst traits of his character. You won't be able to tear your eyes away, even when you want to."
​~ Fiction's Mistress review of 'Crazy Right'

**LETTERS: Prologue to Escaping Freedom is now available to purchase at Vimeo on Demand and Prime Video US.**

Patrick has been afforded the opportunity to work with film talent including:
-Kelly Reichardt in First Cow
-M. Blash in a music video for Austra

Patrick has appeared on television in:
-NBC's Grimm
-As a principal in commercials for Oculus, JEEP Renegade and Fred Meyer

Patrick's stage role highlights include:
-John Worthing in The Importance of Being Earnest
-Thomas Cromwell in A Man for All Seasons
-Multiple roles in The Most Fabulous Story Ever Told
-Le Vicomte de Valmont in Les Liaisons Dangerueses

Patrick was the recipient of:
-Best Lead Actor at the '18 Oregon Independent Film Festival for Crazy Right
-Nomination for Best Performance in Crazy Right by UK Film Review (alongside Glenn Close & Bradley Cooper)
-Best Lead Actor at the 7th Annual Guignolfest for his performance in The Bends
Patrick has a Bachelor's Degree in Criminal Justice, with minor fields of study in Psychology and Theatre.  He worked in Child Abuse Investigations for many years in Texas prior to relocating to the Pacific Northwest.  When not acting, Patrick helps train medical and nursing students as a 'simulated patient actor'.  He also loves exercising, cooking and playing with his two rescue greyhounds, Abby and Change.  ​